For those of you who don’t know, Daniel and I have been engaged for a little over a week now!

I’ll be honest, I knew it was coming soon, but I didn’t know it was going to be on Christmas Day.

These past five years dating Daniel have been nothing short of an adventure and that didn’t stop at his proposal.

A few days before Christmas, Daniel asked if I could go walk his family’s dogs in the afternoon on Christmas Day because they would be gone most of the day visiting family. I didn’t think anything of it because he has asked me to do this before and I have never missed a chance to play with the puppies.

Around 5pm on Christmas Day, Daniel called and asked if I could head over to his house to walk the dogs and also that there was a card from his mom in the wreath on the front door waiting for me when I got there. Little did I know that he was parked up at the golf club down the street, waiting for me to drive by so that he could rush to my house to get everything set up.

So, I drove over to his house and right before pulling in the driveway I noticed everyone’s car was there but Daniel’s. Obviously, everyone was home, so I didn’t know why he had asked me to walk the dogs. I walked up to the front door and there was an envelope taped to it with my name written on it in Daniel’s handwriting. Now I was suspicious. He wrote a sweet letter saying that he was happy to be celebrating our fifth Christmas together and that the next note would be upstairs taped to the window facing the high school. I walked into his house and was happily greeted by the dogs and his mom who asked about the letter. I told her that I had instructions to go upstairs to retrieve the second one. 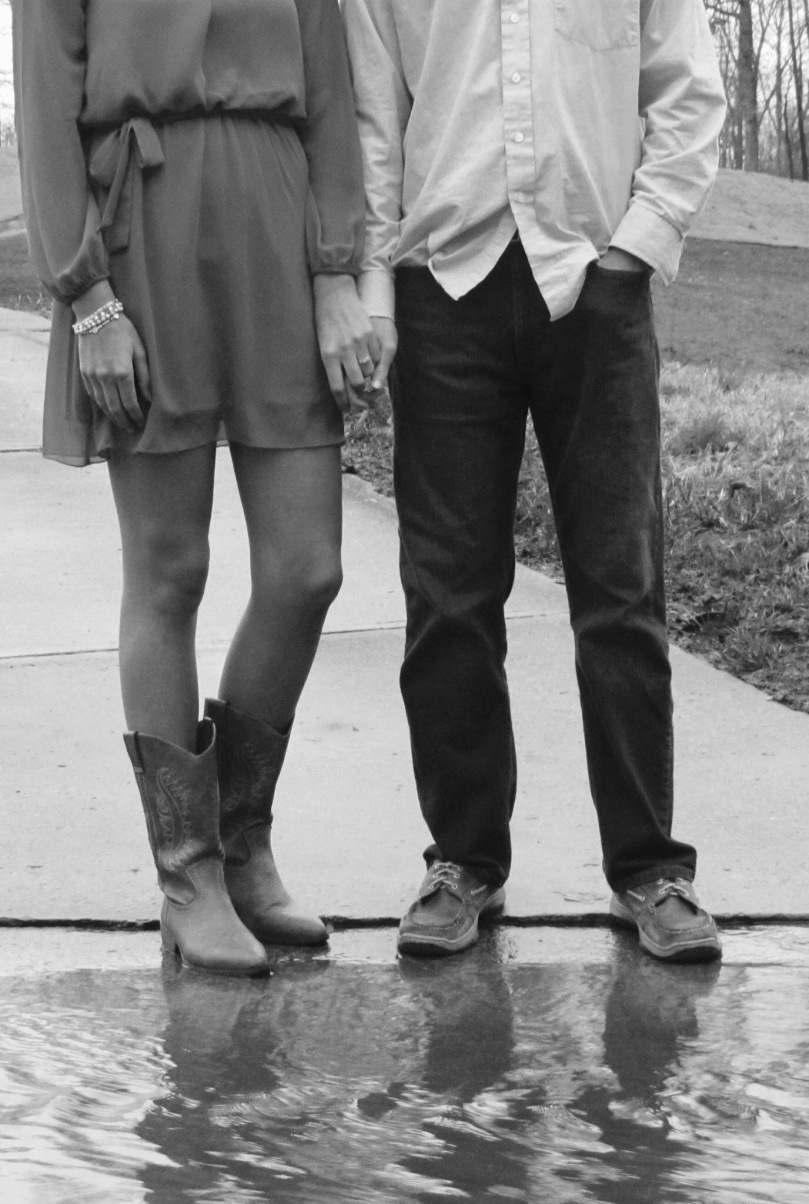 I walked upstairs where some of his family were. His younger sister, Ellie, kept asking me what the letters were for and if it was just a part of my Christmas present. I thought she was just playing along with the proposal, but later I found out that she actually had no idea what was about to happen!

I went over to the window and got the letter. This one told me to look up at the high school and although it may not seem very special, it is an important place for us because it was where we first met. More instructions followed saying that the next letter would be out in the mailbox. I walked downstairs and outside and opened the mailbox and the third letter. This one told me to get my next letter on the front door of MY house and while I drove back home, to think about all of the fun times we’ve had together and memories we’ve made throughout the years. I said goodbye to his mom and hopped in my car, eager for what was to come next!

I got home and saw Daniel’s car in the driveway, so I knew I was getting closer! I walked up the steps to the front porch and opened the fourth letter taped to the door, which told me to come inside and sit down at the chair with the final letter in it. I peeped inside, but there was no one to be seen. I opened the door and walked into the living room and saw the door to the bonus room was closed so I thought everyone was upstairs waiting for me. Then, I saw Daniel’s laptop sitting on the coffee table surrounded by pictures of us throughout the years, candles and flowers. The chair with the letter in it was the very place Daniel sat when he first came to meet my parents right before our first winter formal together when we were in high school. 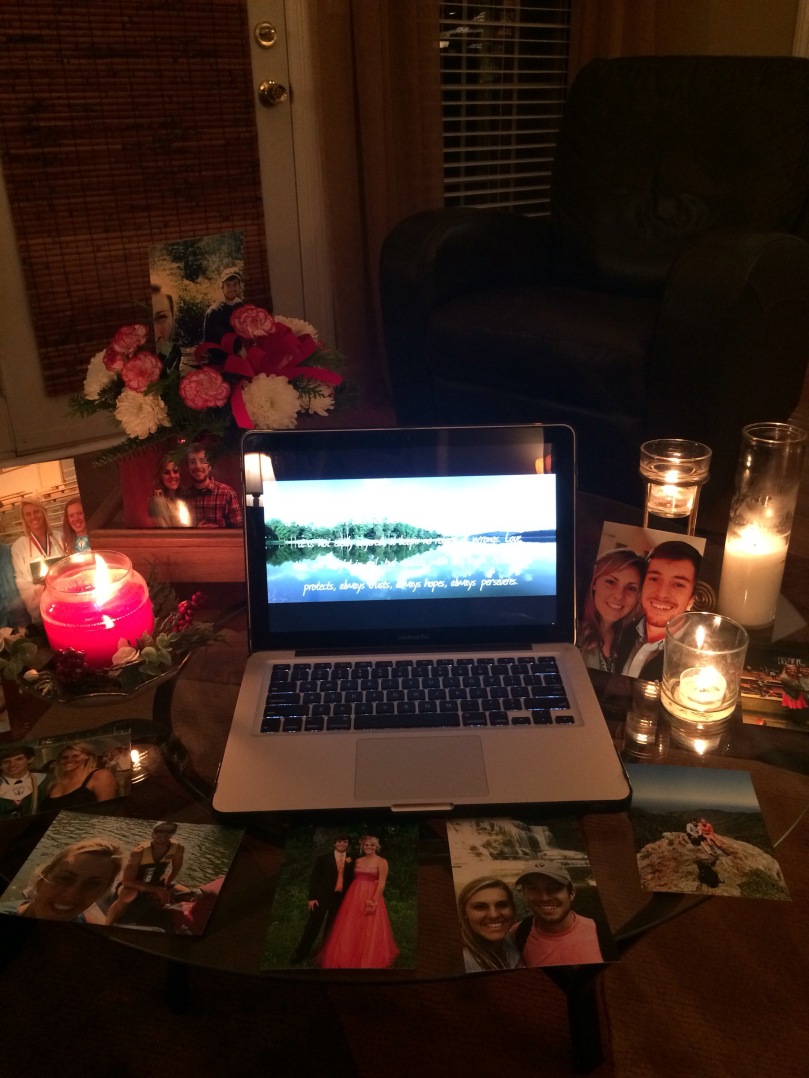 I opened the letter and he wrote that he chose this chair for a reason. He chose it because this was where it all began and we have grown up in this house. Next, the letter said to press the play button on his laptop. I pressed play, saw his sweet face on the screen and watched the sweetest video he made titled “50 Things I Love About You”. Throughout the video it showed Daniel holding up signs like #50, #49 and so on with things that he loves about me written on the signs. One of my favorites was “I love that you pick out the best avocados,” with the sign sitting in a bin of avocados and Daniel reaching down and grabbing one to hold up to the camera (We love making guacamole and Daniel tends to pick the really hard avocados!). There were scenes of Daniel at his apartment in Cookeville, at the laundromat, out on a run, and some of me spinning around the Christmas tree and hiking up Mt. LeConte. It was so special and unique and it made me both laugh and cry. I thought I was all alone downstairs, so I didn’t care that I was blubbering like a baby. 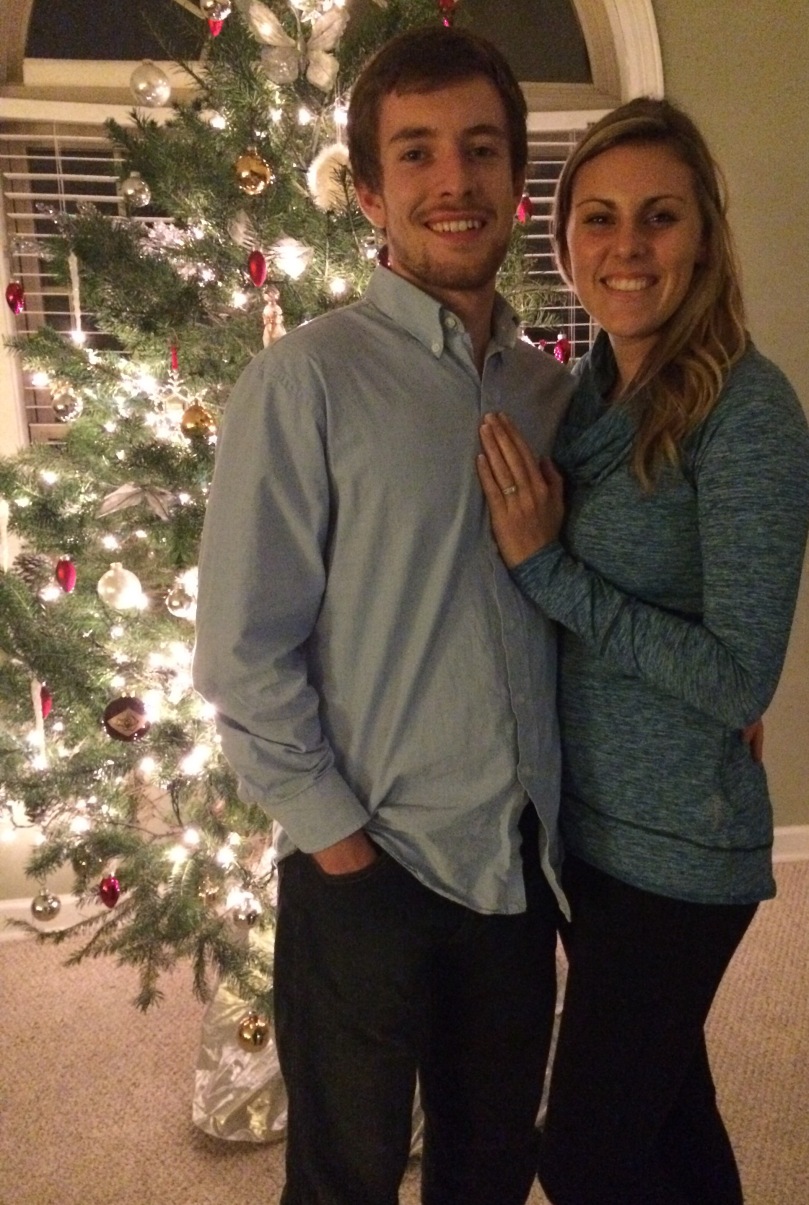 After the video ended there were no further instructions, so I was going to walk upstairs where I thought everyone was. Then, I heard footsteps and Daniel came walking out from behind me (I had no idea he was there watching me the whole time!). I stood up and he took my hands in his and said a lot of sweet things and then at the end of his little speech he said, “So……” with a big grin on his face. I knew what was coming, so I couldn’t help but jump up and down! He got down on one knee and asked if I’d marry him and I bent down and half yelled,”YEAH!!!” several times to answer his question. When he stood back up, I couldn’t control the water works and he kept telling me that I still had to put the ring on. He slipped it on my finger and I adored it’s classic, vintage design. No one else was around, no cameras– it was our moment and one that we will replay in our minds over and over. 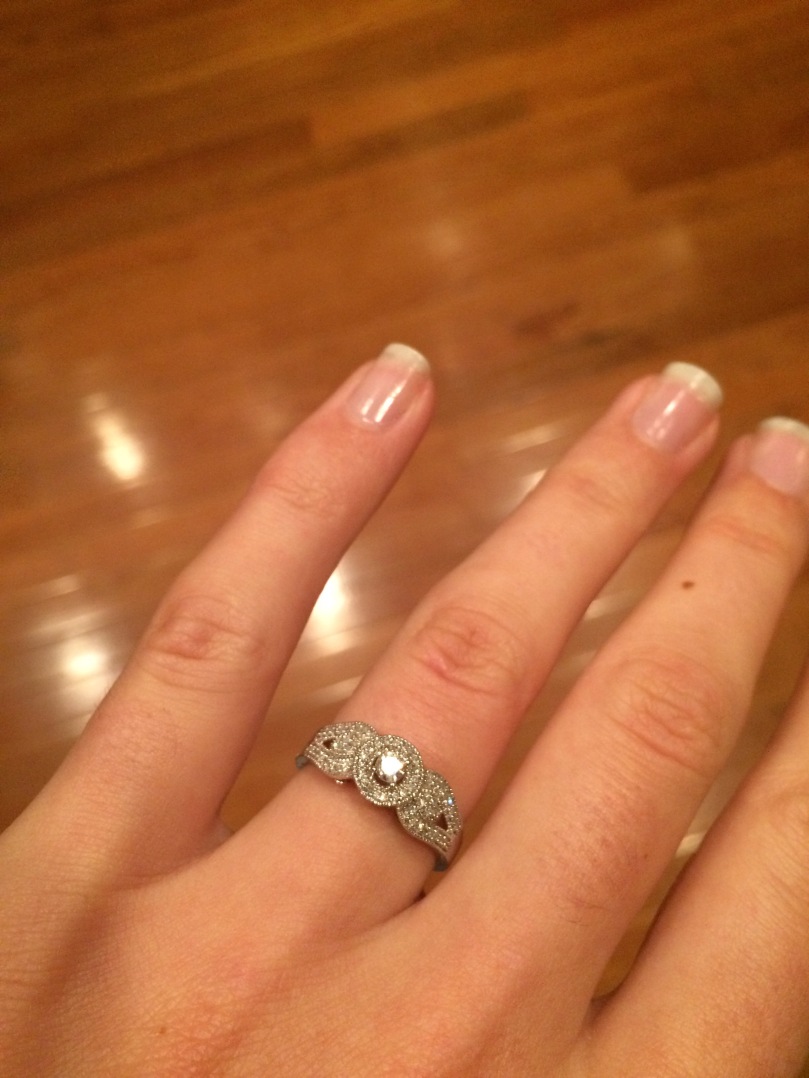 That night, we celebrated with a huge, homemade meal my mom made for us all. I loved that Daniel involved our families in the proposal.

We are thrilled to see what this year holds for us and are ready to start our life together as a married couple!

Hey there! I’m Jill, he's Daniel, and together we're the Thompsons! We live in Knoxville, Tennessee, love the outdoors and are always on the lookout for our next adventure. I'll share a little bit of everything here. You can expect posts about healthy living, travel, married life (as we figure it out) and maybe a money saving tip or two. We're glad to have you along for the ride!